The protagonists of Deniz Gamze Ergüven’s excellent Mustang are making the transition from childhood through adolescence, towards adulthood. It is one that turns each of us into individuals, with our own experiences bringing out a personality unique to us. And yet it is one we all make, and as such we can recognise parts of the journeys of others. Ergüven, with the talents of an extraordinary young cast, combines both of these points to create a consuming, passionate film about following rules, breaking rules, and how we are shaped by love and loss.

For the five orphaned sisters living in an isolated Turkish seaside town, friendship is each other. Controlled by an uncle who is patriarchy personified, while judged and envied at once by the older women of the town, they find solace in their own special interactions. However as they start to desire new people and places in their lives, their elders react by jailing them in their imposing house. Socialising with boys and trips to the football are banned, and in their place are cooking, sewing, cleaning and a steady, lugubrious path towards arranged marriage. The lines are drawn for a battle between the old Turkey and the new; between a culture of forbiddance, and an inquisitive, expressive way of life.

This is Ergüven’s first film, and she could not have picked a better stage on which to set it; she fully understands these houses, beaches, roads, towns and the lives that take place upon them. The narrative benefits from its simplicity. The rules of what is and, more often than not, what is not allowed are established early on, so we can revel in each transgression the girls make, but also fear for the retribution they will suffer. There is light and moments of great humour (look out for a power-cut during a football match), but also a darkness for which there literally are no words. The culture represented by the elders is shown as increasingly monstrous, its traditions for women forcing them into a silent submission; but Ergüven never lectures to us, allowing the brightness of the girls to illuminate the gloom around them.

For their marvelous performances the five young women jointly received the Lumières award, previously won by Audrey Tatou, Mélanie Laurent and Adèle Exarchopoulos, and it would be no surprise to seem them achieve similar acclaim. In particular Günes Sensoy as the youngest sibling carries the responsibility of the main role of Lale (pronounced Laa-lay) with a beautiful lightness. It is often said that young actors are great because they are being, not performing; but Sensoy (who was aged 13 during filming) is most definitely playing the part, with a spiky, engaging honesty. Nevermind Mustang Sally, she is Mustang Lale (not sorry). Elit Iscan as Ece provides a spirited role model for her younger sibling, while also showing how the net of rules can strangle even the happiest of souls. Films about teenagers often focus upon extra-familial friendships; Mustang instead is sisterhood in all its puissance, as effecting a portrayal of the connection between sisters as you will see. Both Ergüven and her actresses have spoken about what it means to tell this story on screen as women, and they give a brilliant portrait of the conflicts of modern femininity. 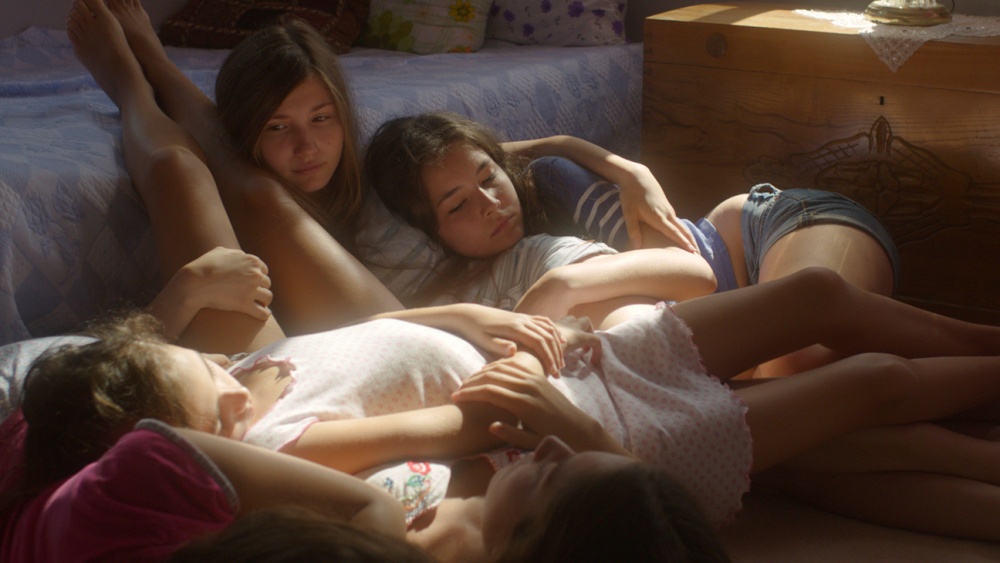 As well as feminism charging through the screen, there is a timely reminder of the value of travel – or more accurately, the danger of seclusion. This is both inside and outside the story; it is only by breaking free of their town that any of the girls can achieve a sense of self, which Ergüven herself is a Turkish-born, French-raised director whose mixed background clearly informs her worldview. Without the potential for movement, stories such as this would not exist.

I could not post a review of this film without referencing an equally potent Turkish coming-of-age tale; The Blue Wave (Mavi Dalga in Turkish), a quietly astounding picture from 2014 by Zeynep Dadak & Merve Kayan. Like Mustang, it centres on a group of Turkish adolescents trapped in their village by the sea, their lives bouncing between the sun-faded walls but their minds reaching towards greater things. It is worth searching out for a mesmerising main performance from Ayris Alptekin, who is all of the Mustang sisters combined; naive, nervous, confused, but also hopeful, brave and a powerful representative of a changing culture.

A Best Foreign Language Film nominee at this year’s Academy Awards, Mustang is showing at independent cinemas across the country right now.